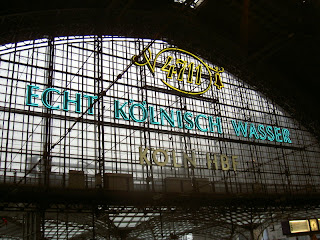 A few minutes into the train journey George and I took out of Cologne I tried to make a joke as crippled as it was over-complicated, inexcusable even in one who was feeling the worse of a failed tryst with Adèle (not that I really believed that she would ever turn up), a rough and unwashed night in a dark corner of Cologne station, being refused entry to Cologne cathedral because of my tramp-like appearance, several goes of schnapps, having my pocket-book and money stolen, and being rescued by a termagant cleaner from attempted rape by laying about my predatory assailant and me with a wet mop. I quoted from Schiller's An die Freude, that Ode to Joy from which Beethoven took some of the better lines to set for the last movement of his Ninth Symphony: something about wishing I felt a bit more Freudig, wie ein Held zum Siegen, with the exultation of a victorious hero, a hero coming to Siegen, i.e.victory. Siegen, where I understood we were heading for, also happened to be the name of a town some stations down the line, a place from which we could easily reach Bonn and I at least could bow the knee at Beethoven's birthplace. George grunted and continued looking out of the window at the Sunday suburbs and sleeping factories of Cologne. I have a faint and probably mistaken impression of passing a factory chimney decorated with '4711' in immense vertical figures, the trademark of Echt Kölnisch Wasser, the true Eau de Cologne. I mention this merely to confound and if possible set at one another's throats those critics who assert:

1. You couldn't possibly have seen such a chimney. There was no such chimney to see. It was razed during the war and had not yet been rebuilt. Whereof you cannot speak, thereon you must remain silent.

- and those who ask:

2. How come you missed the 4711 chimney? It's like describing walking across Westminster Bridge and leaving out Big Ben. Clearly this account is thoroughly flawed and we can't take your word for anything.

No odour of Eau de Cologne wafted in through the slightly open window, only scents of railways and high summer industrial concrete. I slumped back, as far as the hard leather seats allowed slumping, put my feet up on my rucksack and dangled tempting images of a shave, a bath, a square meal and a bed before my inner eye.

I doubt if insightful glances into the Eroica interrupted the rail-rhythmed and points-rattled mental procession of hot water, razor and sponge, followed by a glorious stream of hot rich stew gurgling on to our plates, completed by visions of a warm, yielding, fresh-linened bed somehow conflated with Adèle's warm, yielding body, preferably without any linen at all; this last an a priori dream if ever there was one, and 'yielding', in the context of desirable women, being a word cogged out of Far From the Madding Crowd.

George asked to look at my map of Germany. Along with a similar map of Austria, this was one of the very few concessions to providence that I'd made before leaving. Even this was more in the spirit of a joyous anticipation, tracing the lines I imagined we would travel with an eager finger, sounding silently to myself place-names heavy with a motley of iconic overtones: Bonn, the cradle of Beethoven; the Lorelei on the Rhine, subject of a poem by Heine which expressed much of what I felt about Adèle in more bitter moments; Mannheim, the nursery of orchestral playing; the Starnberger See near Munich, where mad King Ludwig II of Bavaria drowned himself to slake the pangs of unrequited love for himself as the incarnation of Lohengrin or Parsifal; Salzburg, fief of the Mozarts, and finally Vienna. This is the glory of maps, beside which their practical use becomes almost incidental: easy-going and undemanding - yielding, even - companions in travels in hope, innocent of the frequent disappointments of arrival. But I would have had no end of a job persuading George of this.

I glanced at the map. It was indeed. So abandoning any thoughts of an auto-heroic entry into Siegen, I settled for Siegburg, which is such a modest distance from Cologne that we arrived there virtually at the end of this conversation, shouldered rucksacks and set off for the nearest autobahn entry point. No banks or bureaux de change were open in Siegburg that Sunday, so the francs I'd come by in Liège remained solidly Belgian in the back pocket of my shorts.

We set up thumbing-station, and presently a man in a Mercedes stopped for us, asking the question that was soon to become invariable: Wo fahren Sie hin? Where are you going to to? Vienna seemed a tall order: I thought of somewhere not too far, but not too near either. Frankfurt, perhaps?
- Frankfurt, I said.
- Ja, ja. Steigen Sie ein. Get in.

I had never travelled faster in a car. Our driver, a large, paunchy, middle-aged man with cigar ash littered down his shirt, his lap and on to the floor beneath him, drove at a steady 200 kilometres per hour down a mostly straight and featureless motorway, one of those civil engineering achievements that no one at that time was prepared to acknowledge as a pre-war legacy of Adolf Hitler.

He told us he had just escaped from prison.

Posted by Christopher at 12:48 No comments: 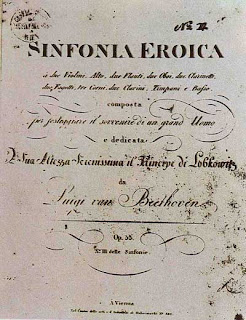 Beethoven was sometimes obscure about what outside factors had influenced his compositions. Asked about the 'meaning' of the Waldstein piano sonata, composed in 1804, a year after the Eroica, he replied 'Read The Tempest'. I expect this was extraordinarily frustrating for anyone who thereupon went scurrying off to a recital of the Waldstein sonata with a copy of Shakespeare's play, hoping to find a parallel narrative: passages in the music where the Viennese listener could whisper Ach ja, das muss der Caliban sein (Ah yes, that must be Caliban) or - we can have this in Viennese dialect, even - Wart a bisserl, ich glaube, das ist die Miranda, die sagt sowas wie: So a schöne neue Welt, und dann wohnen solche Leute drin! (Hold on, that's got to be Miranda saying 'O brave new world, that hath such people in it'.) Of course there aren't any such direct correspondences, and attempts to find any reduce the Waldstein sonata at best to the level of incidental music and to a Brush Up Your Shakespeare quiz at worst. So with the Eroica.

There is no biographical or narrative content in the Eroica. Shortly before its composition Beethoven poured out his despair, brought about by his chronic illness and ever-worsening deafness, in letters to friends and in his will. Several are quoted above. He felt death approaching. He was 32 (he may have believed he was 30) when he wrote the will known as the Heiligenstadt testament after the village where he wrote it, now an inner suburb of Vienna. Few 32-year-olds are concerned about making their wills, very few indeed in the terms of the Heiligenstadt testament. The will mentions thoughts of suicide. Beethoven believed his physical state was drawing the curtains about his art. It was the end. Will it not free me from a condition of endless suffering? Come when you [i.e. death] will, I will meet you with courage, he wrote among the final lines of his testament.

The Eroica was Beethoven's response. A year or two earlier he had expressed himself to Franz Wegeler, his doctor friend from Bonn days, with typically Beethovenian defiance: I will grasp Fate by the throat; it shall not conquer me. We don't know what last gasp of fate, or lightning flash of courage, or what misty dawn of hope, raised his spirit. Maybe it's more likely that there was just the slow, firm, onward tread of determination not to to succumb, not to surrender to despair. He had no conventional religion; his strength came from within him. Maybe work on the Eroica - which is very highly wrought - and other compositions was therapy in itself. Suggestions have been made that, in the absence of any evidence of opiates from the analysis of samples of his hair and bone that I outlined earlier, Beethoven could lose himself in composition so completely as to eclipse pain. So little are we taken with things of the spirit that we may find it hard to imagine the surge of uplift and joy Beethoven experienced, the shiver down his spine, as odd scraps and phrases destined to find their place in the Eroica found their way into his musical imagination. The hero, the Prometheus, trailing clouds of joy, coming with laughter from afar, was himself, and, through himself, us. The Eroica is a celebration of any human being, then or now, who has won against heavy odds and has shared the fruits of success.

Posted by Christopher at 14:08 No comments: