Breakfast in the Shangri-La: A Useful Guide to calling Room Service

RS: No? Judo one Toes?
G: I feel really bad about this, but I don't know what 'Judo one Toes' means.

(I believe this or something very like it appeared in the Far East Economic Review several years ago. My son Nibus sent it to me in 1999. It resurfaced while going through some old papers. WARNING: There may be more.)

But what's 'torino fee'?
Posted by Christopher at 07:00 No comments:

Conjecture in black and woite (3)

Margaret of Anjou, hot-blooded, proud and wilful, went on to become a major figure in the Wars of the Roses, taking a leading role from her unwarlike and unstable Lancastrian husband, King Henry VI. She became a target for the opposing Yorkist forces, who slung every dollop of mud that came to hand. One of the slanders concerned the night before her wedding, spent in St Margaret's, the house I was privileged to live in for a few years when I was quite small. She was not alone, apparently. Fingers were pointed at William de la Pole, later Duke of Suffolk, an influential figure who had arranged Henry's marriage with Margaret, had stood in for Henry at the betrothal ceremony in France which preceded the actual marriage in Titchfield in 1445. It was he who had escorted Margaret from France to Titchfield. The most you can say about such allegations is 'well, they would say that, wouldn't they?'

5 years later, as the full fury of the Wars of the Roses was about to burst, William de la Pole was captured by Yorkists at sea, off Ipswich. His possibly headless body was left on the beach at Dover, where Queen Margaret had it recovered and taken care of. He had long been her favourite. She gave him a decent burial at Wingfield, in Suffolk.

What stands out for me in this account is the association of St Margaret's with a passionate young girl of noble family, on the edge of adulthood, being forced into an arranged marriage. I'm not quite certain what 'passionate' means in this context: a hapless martyr to her emotions, maybe.

Almost a century later Henry VIII broke with Rome, not so much over matters of doctrine as of authority, principally the authority to enable his divorce from Catherine of Aragon. Short of money, it was also an expedient time for him to close down, annex or sell off the great religious houses, a 1536-9 movement known as the Dissolution of the Monasteries. Seeing which way the wind was blowing, an astute courtier and able servant of both Cardinal Wolsey and Thomas Cromwell, a Londoner called Thomas Wriothesley (pronounced 'Risley') bought out the Abbot of Titchfield before his Abbey and its estates could be suppressed.

In due course, for services to Henry VIII, Thomas Wriothesley was created Earl of Southampton. He transformed Titchfield Abbey into a palace, which he called Place House, I don't know why. It's a ruin now, pictured above. Other estate houses were upgraded and enlarged. Maybe St Margaret's was among them. Thomas Wriothesley's grandson Henry, 3rd Earl of Southampton, was a favourite at the court of Queen Elizabeth I. In the early 1590s, in the course of court activities he met an up-and-coming poet and playwright, rising 30, attractive and intelligent, witty, educated and companionable, drawn to London from his native Warwickshire. His name was William Shakespeare.

Rubens' Venus and Adonis, in a presentation Henry Wriothesley, 3rd Earl of Southampton would have appreciated

Southampton and Shakespeare got on very well. In 1593 Shakespeare dedicated his long and sexually palpitating poem Venus and Adonis to Southampton, which maybe says more about the dedicatee than the poet. In the summer of that year the London theatres were closed because of the plague. It's a possibility that Shakespeare first came to Titchfield then, partly to escape the plague and partly to pursue his friendship with Henry Southampton.

I suppose it's also a possibility that, in riding together about Place House, Shakespeare asked his host - by now his patron - how Anjou Bridge, a bridge over the Meon close by the former Titchfield Abbey, had got the name it still has today. If he knew the story, Southampton would have been in a position to tell him about the passionate 15-year-old French princess, her overnight stay at St Margaret's and the marriage that had been arranged for her. Maybe those House Detectives, exploring the connection between St Margaret's and Romeo and Juliet in that BBC TV programme didn't look quite far enough outside the frame.

And for the multitude of serious historians whom come here, I did entitle this mini-series 'Conjecture....'


(to be continued or even concluded, who knows?)
Posted by Christopher at 07:00 No comments:

Conjecture in black and woite (2) 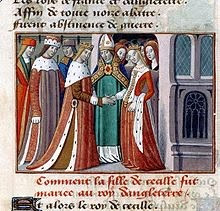 When my mother bought St Margaret's, a great house on the edge of the Hampshire village of Titchfield, one of the first things she did was commission a stained glass window by an artist called Donald Brookes. The window, installed in the porch beneath the tower, showed St Margaret surrounded by flames. There are several St Margarets in the lists of saints, so which St Margaret my mother or Donald Brookes had in mind is a guess.

My money goes on the earliest, St Margaret of Antioch, who belongs in the same Apocryphal Saints Club as St George and St Nicholas and many others. She appears to be the same person as St Marina or St Pelagia. Maybe there's some kind of sea element here: the word 'Margaret' means pearl, 'Marina' speaks for itself and 'Pelagia' is a Greek word for marine. According to the legend the first St Margaret, a devoutly Christian shepherdess, received an offer of marriage from a Roman notable, on condition that she renounce her faith. She refused. She was tortured in an attempt to make her change her mind, and was eventually done to death, burnt, maybe. She worked various miracles involving dragons during her torture. Virgin and Martyr, she became the patron saint of childbirth and pregnant women, shepherdesses, those falsely accused, exiles and, curiously, those suffering with kidney problems. She became a Christian cult figure in England at the time of the crusades, roughly 1100-1250.) In essence she is a personification of courage, determination and faith.

Almost exactly 500 years before Donald Brookes' window was commissioned and installed, another Margaret, much less shadowy, comes into the picture. In the early 1440s King Henry VI, aesthete and slightly unbalanced son of the victor of Agincourt, was looking for a queen. The choice fell on Margaret of Anjou, a French princess with strong continental dynastic connections. Margaret was sent for from her home in Lorraine (she was born in Pont à Mousson, now an ironworks town known to every Frenchman because the name is cast on innumerable manhole covers), she sailed across the Channel and put in at Titchfield Haven, then a small port on Southampton Water. From Titchfield Haven she rode the four miles inland to Titchfield, where she was due to be married the next day, April 23rd 1445, to the 23-year-old Henry VI.

The wedding venue was the chapel of Titchfield Abbey, a Premonstratensian monastery by the banks of the river Meon. The Titchfield Abbey lands (I expect 'messuages' is the correct term) included a guest house or just possibly a small convent on the hill to the west of Titchfield village. Or maybe St Margaret's was just one of the eight manors with which Abbey was endowed. However it might have been, this was where Margaret of Anjou spent the night before her wedding. Maybe it was in her honour that the house (or its predecessor) that we lived in half a millenium later was called St Margaret's.

Margaret of Anjou was a month past her fifteenth birthday. The historian Paul Kendall describes her as 'already a woman: passionate and proud and strong-willed'.

(To be continued. Sorry, Vicus.)
Posted by Christopher at 14:52 No comments: 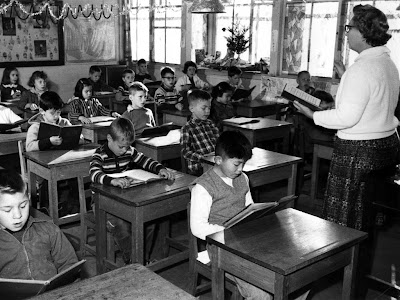 In the course of New Year greetings a long-silent American friend called Greg Abbott phoned. There was a long rambling conversation, of the type you have when you're catching up with friends you haven't spoken to for several years. You can maybe judge how rambling the conversation became: at one point he spoke about a schoolfriend called Zygslič. Their class was seated in rows, and where the kids sat was determined by the first letter of their surnames. Accordingly Abbott sat at the very front, while Zee for Zygslič was assigned an obscure desk at the end of the back row.

Now in his 80s, Greg wondered what effect this ordering had had on his subsequent development. Had the limelight of the front row caused him later to shun exposure? Had back-row obscurity turned Zygslič into a kind of lowly, furtive troglodyte, desperate for attention? How would Greg have turned out if he'd been called Zygslič, and vice versa? There are no answers to questions like these, of course. Maybe with a phonetic name like Abbott you tend to have fewer problems with spelling than the eternal suspicion and self-distrust you possibly have about it if your name's Zygslič. (I'm very tired of typing this wretched name, so this is the last we'll hear of him.)

When I first went to do my stint at the chalk face in Scotland I had a mixed class of 10 and 11-year-olds, known in Scotland as Primary 7. There were about 40 of them, great kids. I was surprised to find that each one of them knew exactly where to sit, at which individual desk in which row.

I asked one to tell me how this was. The lad stood up, shoulders back, chest out, feet apart at an angle of 45º, thumbs pointing down the seams of his shorts, as though he was standing to attention in the Black Watch or the Gordon Highlanders. (It wasn't a military school in any sense. It was an ordinary primary school in a North-east fishing village. However, this lad belonged to the Boys' Brigade, I discovered later.) As Primary 6 they'd had end-of-year tests the previous June. If you failed the tests you stayed in Primary 6 and repeated the year. (Very few did.) In Primary 7 you sat according to the marks you got in your tests. The brightest kids sat at the front, the average in the middle, slowest at the back.

I thought this was an iniquitous system and, after a week or two in which I'd got to know the children, I changed it for something less pointedly segregational. Their Primary 6 teacher, a Mrs Crumbie, was furious and there was a big staff-room row. It was as though the purpose of Primary 6 tests, indeed of the whole Primary 6 syllabus, was to determine seating order for the next school year. I'd just arrived from teaching in England. Clearly I represented everything that undermined and devalued the order and discipline that made Scottish education famed throughout the world. I was a dangerous threat and ought to go back to England. This was a heavy charge, but I stood my ground. I expect I seemed very arrogant.

I didn't know Greg Abbott then. If I had maybe I would have used the A to Zee system.

This isn't Mrs Crumbie in the photo above. The kids I'm writing about wore uniform, and teachers were expected to wear academic gowns, called togas in Scotland. I suppose they protected clothes from chalk dust.
Posted by Christopher at 11:49 No comments: