I don't propose to analyse this letter [for the text see the previous post] in any detail, or to weigh up the evidence for and against any of the various contestants for the title die unsterbliche Geliebte, the Immortal Beloved, fascinating though this sort of historical detective footnoteism may be. If the letter in itself led to deeper insights into Beethoven's music it would be a different matter, but it doesn't, so it's probably enough to say that it was written in the summer of 1812 from Teplice, a spa town in what is now the Czech republic. Teplice was a fashionable resort, where the 42-year-old Beethoven had gone, for the second consecutive summer, to take the waters on the advice of his doctors in an attempt to relieve his appalling gastric condition and his deafness.

In July 1812, while Napoleon was preparing to invade Russia, a brilliant company gathered in Teplice, Beethoven among them. Here Beethoven met Goethe, two colossi of European culture, each as illustrious as the other in their different ways. The meeting wasn't a success. Neither pleased the other. Beethoven thought Goethe too wordly, too subservient to rank, too engrossed by the superficialities of court life. Goethe reported to his wife that same July that in Beethoven he had never before seen a more comprehensive, energetic or intense artist. I understand very well how strange he must appear to the outside world. While confiding to his diary that Beethoven 'played delightfully' - which seems to me on the more shadowy side of faint praise - Goethe wrote a few weeks later to a Berlin friend:

I met Beethoven in Töplitz [Teplice]. His gifts amazed me; but unfortunately he is a completely untamed person, who may not be wholly wrong in finding the world a detestable place, but in taking this view he doesn't make it any less detestable for himself and others. Much may be forgiven him, and sympathized with, because he is totally deaf. This may affect his musical life less than it does his social life. As he is by nature a laconic man, he feels this deficiency doubly.

Later that summer, maybe two months after the Immortal Beloved letter, Beethoven wrote in his journal, sometimes addressing himself in the first person, sometimes in the second: Submission, total submission to your destiny, only this will enable you to make the sacrifice … you can no longer be a man, not for yourself, but only for others, for you there can no longer be any happiness except in yourself, in your art - O God, give me strength to conquer myself, nothing must chain me to life. So everything connected with A. is destroyed.

Reading this heartbreak through we can wonder who 'A'. was and whether she was the Immortal Beloved. Some have argued for Amalie Sebald, some for Antonie von Brentano, some have muddied the waters further by suggesting that it isn't an A in Beethoven's manuscript at all, but ST: maybe not an impossibility given the nature of his handwriting. We can wonder again what happened to his letter, whether events overtook its being sent, whether it was returned with a refusal, whether it simply missed the post he refers to urgently. For me the most intriguing question is why he kept it, along with other private papers, until the end of his days some fifteen years later.

I can't think it likely that the Immortal Beloved letter was unique. From his late adolescence until middle age Beethoven was never out of love. There was always some woman, married or single, in the sights of his affections. According to his Bonn friend Franz Wegeler, Beethoven didn't have to raise his sights very high: In Vienna, at least while I was living there, Beethoven was always involved in amorous relationships, and sometimes made conquests that would have been hard, if not impossible, for many an Adonis to achieve.

For what it's worth, we know the names of some, probably not all, but enough to suggest a flattering succession of talented, clever and sometimes beautiful women: Amalie Sebald, Giulietta Guicciardi, the half-sisters Bettina and Antonie von Brentano, Dorothea von Ertmann, Magdalena Willmann, the sisters Theresa and Josephine (known as 'Pepi') von Brunswick, Theresa Malfatti. He thought very seriously about marriage with at least several of these. He enjoyed deep and rewarding friendships with some, but they resolutely stopped short of any closer attachment. Like most men he wanted the impossible. Beethoven's ideal of a woman and wife, what Goethe was later to call die Ewigweibliche, the ever-womanly, in Part 2 of Faust, is enshrined in the the part of Leonora in his opera Fidelio: Leonora, part young woman, part angel (although this isn't specified in the dramatis personae) gives everything unconditionally, including the offer of her life, to ensure the survival and liberation of her husband Florestan, a political prisoner being starved to death in a Spanish oubliette. It used to be said that all right-thinking married couples should attend a performance of Fidelio on their wedding anniversaries.

Having no other outlet he poured into his music his great capacity to love and his corresponding need to be loved which are expressed so urgently in the famous letter. Would it have been otherwise if he had married? Is it flippant to murmur thanks to the shades of the Immortal Beloved and her sisters for turning him down? 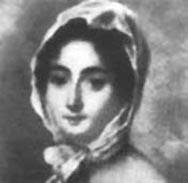