J. has never been much drawn to specifically Viennese dance music, the music of the Strauss family with all those waltzes and polkas, galops and quadrilles, whereas I'm a hopeless case, pathetically addicted to it. So it was particularly noble of her to sit through a sparkling performance of Johann Strauss' Die Fledermaus for my benefit. While in Vienna we noticed that an opera by Vivaldi called Il Giustino was on for one night only at the Theater an der Wien. Neither of us had ever heard of it, but Vivaldi is a name that usually means your ticket money won't be wasted. And seeing that she'd stood (actually sat, in a red plush box chair) by me while I indulged my addiction, the least I could do was to stand by her in her love of Baroque opera. So we bought a couple of tickets, the last available in the second row of the stalls.

I don't dislike Baroque opera, I just find other periods more interesting. (Except Wagner. If my advanced age allows me one or two little indulgences, one of them is by-passing Wagner. I can only apologise to the myriad of Wagnerians who come here with every new post: all I can say is that you've got all the more of him to yourselves.)

But the Theater an der Wien drew me irresistibly. For those that set store by these things, it's a kind of Holy of Holies. I expect the theatre has burnt down and been rebuilt, or closed down by the censor or gone dark or broke in its 210-year history, but I don't care: not only did Die Fledermaus have its première here, the first performance of The Magic Flute took place here, and Mozart himself on one occasion shortly before his death crept into the orchestra pit to play the glockenspiel, the magic bells that made Monostatos and his goons dance. Beethoven, on whose grave I had placed a rose a few days earlier, conducted the first performance of Fidelio there, a few weeks after Trafalgar. (Unlike the French fleet at Trafalgar, it didn't go down very well: the audience was mostly made up of invading French soldiers.) And there we were, just a few metres from where these legendary things had happened.

Il Giustino was given in concert version, no scenery or action. It all seemed pretty exemplary to me, and J. was delighted with it. I'm afraid my attention strayed now and again, seeing in my mind's eye the slight figure of Mozart just beyond us in the pit, stooping over the glockenspiel and casting an occasional complicit eye up to the stage, or the stocky Beethoven on the rostrum, conducting as he did with his whole body, crouching down for soft passages and leaping up for the more excited bits. Happy days. 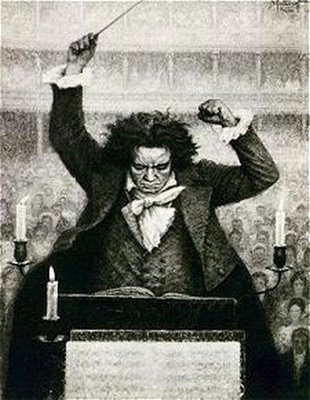 At home a day or two later J., while searching for more information about Il Giustino, discovered a strange, not to say bizarre, website: while it's normally forbidden to film operatic performances, no restrictions apply to filming curtain calls. And here was the curtain call from that very performance that someone just behind us had filmed. Are those our heads on the extreme left? And could this be the least interesting video ever posted?

Posted by Christopher at 11:08