Through a local lens No. 11 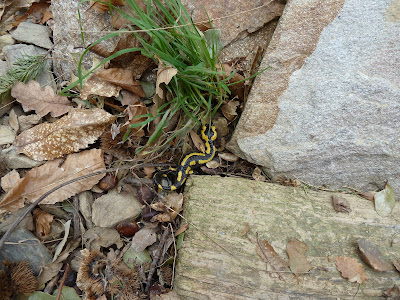 This afternoon while rootling about behind the house tidying up after the winter I was vouchsafed the vision of a salamander, photo above.

According to the old Oikopoiesis legend, to those who are privileged to see salamanders, fabulous wealth is promised. That or eternal condemnation to write quirky and facetious blog posts. It's one or the other. There's no choice. I wonder which will come my way?

And mention of visions leads me to something strange I read recently in Graham Robb's book, The Discovery of France. In 1858 Catholic France was astir with stories of a 14-year-old girl, Bernadette Soubirous, who lived in the foothills of the Pyrenees in a - then- nasty little village called Lourdes. Visions of the Virgin Mary appeared to her and to her sister and a friend on almost twenty different occasions. Less publicised was a similar apparition 12 years earlier, when the Virgin Mary appeared to a boy and girl looking after sheep near Grenoble. They threw stones at her and she went away.

Posted by Christopher at 16:29