On the principle of trying to find something good to say about people, however desperate their villainy, I want to extend a big thank-you to Col. Ghaddafi.

And, to be fair, to King Idris, Mussolini, Giolitti, the Karamanlis dynasty, Haroun el Rashid, Unkh-el Tomh Qhob'leh and everyone else who at some stage or other has ruled Libya, for their very great personal kindness. In their time they must have given me several tons of the sacred soil of Libya, and their generosity knows no end.

Delivery arrangements are haphazard but effective. It works like this. Vast dust storms blow up in the Fezzan. Zillions of minute particles are swept up into the atmosphere, borne wherever the wind blows them. Mostly humid incoming weather systems coming in from the Atlantic gather some of them up, swirl them about and deposit them in raindrops.

Local winds have all got names, Mistral, Tramontane, Autan, Grec, Albigeois. And the Marin. The Marin, warm and wet, starts in North Africa and blows northwards off the Mediterranean, laden with ochre-coloured particles that J. and I call Sahara Dust. It unloads its rain on the first land obstacles it comes to, especially the hills where we live. Sahara dust gets everywhere, into the minutest cracks and crevices, discolouring everything it lands on.

Almost all of it lands on the ground, as it has been doing for millions of years. The ground round here is very stony, shards and lumps of slates, schists and marble, tortured and twisted from the original limestone by immense geological pressures. All these bits are bound together in a sort of natural concrete by a very fine-grained ochre-coloured clay, the result of aeons'-worth of Marin winds bearing their tribute of Libyan dust. It sets pick-axe hard when dry, has no other virtue and only the coarsest weeds will grow in it.

Drystone wall-building occupies a lot of my time at the moment. Drystone ramparts might be a better description. Just now I'm trying to catch up on the lower rampart with the steps in the photo below, which has advanced quite a lot since the photo was taken. I pride myself on jig-sawing the stones together and never using cement. I don't need to: the invisible bits of stones are all set in solid Sahara dust clay. It's not cheating, is it?

So I'm obliged to you, Col. Ghaddafi. Thanks to you my walls are a lot less tottery than your régime appears to be. 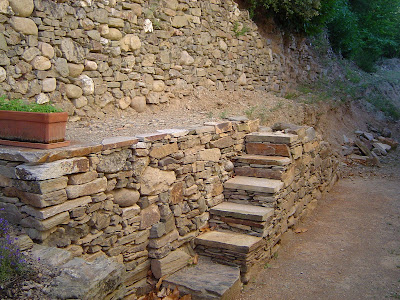 Posted by Christopher at 10:54