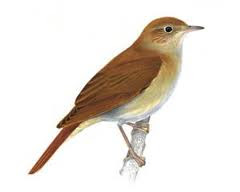 Awaking from a drowsy numbness the other night at about two o'clock, I was so struck by the fluting cascades of bird-song through the open window that I got up and went downstairs, opened the front door and stood for several minutes listening on the flagstones outside, still warm from the previous day's sun.

The nightingales are back. Hearing them for the first time in spring is something like hearing the first cuckoo in other climates. Mid-April is about right, though. Whatever it is that guides these little birds, slightly bigger than robins, on their migratory course from southern Africa back to Europe hasn't failed them. I don't think I've ever read anything about the effects of climate change on migration habits, but I don't expect I've looked in the right places.

A full moon silvered everything as I stood outside in bare feet with little else*. It was exceptionally still, with no sound apart from the ever-present distant murmur of the river. And, of course, the song of the nightingale. Nor was there only one: I could detect four or five, maybe more, each fainter as the distance between their territories swallowed them.

Experts say that it's only the males that sing. Opinion is divided as to whether they sing to mark their territory or to attract females. Maybe it's both. At any rate they sing until the summer heat closes in, but this coincides with birth and feeding of the nightingale chicks, so all the pairings-off must have been made some weeks before. And they sing during the day. There's one singing outside my window as I type this at 10 o'clock in the morning.

My small choir is preparing for a mini-tour of Northern Scotland in less than three weeks' time. They'll defend their corner, certainly, but how many will attract mates with their singing remains to be seen. If we make it, that is, because there's a question-mark over one of our songsters: he fell out of a tree the other day and injured himself. I haven't yet asked him if he was singing at the time. Fingers crossed for him, tho' I think he'll be all right.